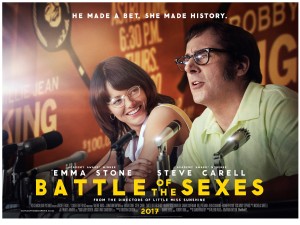 “Some day we will be free to be who we are and love who we love.”

That line from the Battle of the Sexes movie made me cry because it’s nearly a half-century later and we are still battling male chauvinism as can be witnessed from the Weinstein scandal that Michael Moore so eloquently addressed to Trump’s “Grab them by the pussy” tape that fueled instead of doused his presidential campaign, which left millions of us in a state of shock and disbelief.

Is it a sad time for the battle of the sexes that remains or is it a time to celebrate for the Billy Jean Kings of the world who push back no matter how powerful a misogynist monster appears. Since the fall of man there have been and will continue to be a sinful side to mankind, but there is also progress and hope thanks to those who refuse to be silenced.

It was just me and a couple who was in the theater mid-week watching Battle of the Sexes. How I wish the theater was filled so more of us can be inspired to stand up to bullies and live our truth.